And I saw the holy city, the new Jerusalem, coming down from God out of heaven like a bride beautifully dressed for her husband. I heard a loud shout from the throne, saying, 'Look, God's home is now among His people! He will live with them, and they will be His people. God Himself will be with them.'" (Revelation 21:2-3) 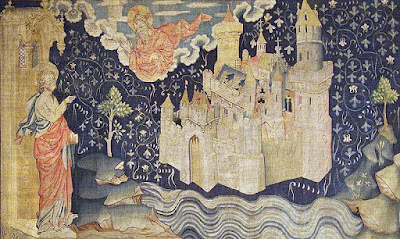 I read and greatly enjoyed Jon Meacham’s The Hope of Glory during Lent, especially a few pages (p 87-88) on the meaning of “life after death” that resonate with me.

He quotes Anglican Bishop N.T. Wright:
Heaven, in the Bible, is not a future destiny but the other hidden dimension of our ordinary life - God’s dimension, if you like. God made heaven and earth; at the last he will remake both and join them together forever.

And from Meacham:
The earth is not a temporary place that will disappear on the last day. It will, rather, merge with heaven, which means “God’s space.” Therefore, one should neither need nor want a ticket out of the created order into an ethereal realm. One should instead be hard at work making the world godly and just.

Lord Christ,
Give me appreciation
for the mystery...

I have this notion
of two realms,
the world we perceive:
our concept of time and space,
what our senses reveal.

Occasionally,
these realms overlap.
It’s a grace
of your spirit.
Liminal things.

Most often,
they are separated
by a thick concrete wall.
The Kingdom of God
can seem
impenetrable.

But truly,
the barrier
is merely a veil,
a mist.

I have another notion,
both theological
and practical,
that your resurrection
set in motion the joining
of these two realms,
of heaven and earth.

While we wait
for the consummation,
I would prefer
to spend more time
in the Kingdom of God,
reaching for it,
working for it.

So...what small part
can I play this day
in uniting heaven
and earth?