The Way. The Truth. The Life.

How can we know the way? Thomas, the Disciple, puts that question directly to Jesus in John 14, and Jesus offers a profound response: I am the way and the truth and the life. No one comes to the Father except through me. If you really knew me, you would know my Father as well. From now on, you do know him and have seen him. (John 14:6-7)

That commanding passage has been used to exclude people of different faiths from the Kingdom of God, but in other verses, Jesus talks about his Father’s house with many rooms and his other sheep. Therefore, I’m content to take this as a personal challenge to better know God. We can strive to radiate our faith or we can be stingy with it. I choose the former!

This prayer was inspired by Scripture Union writer Mary Evans and William Barclay's commentary on the passage. 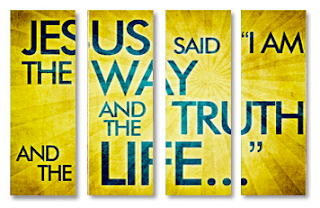 You are my way, my truth, my life.

The Way: The way to God. My path. My guide. I’m prone to stray. Take my hand and lead me. Help me to stay on your course.

The Truth: The truth about God. In teaching and example. A reflection of the Father’s character. Help me to replicate your humility, mercy, healing and sacrificial love.

The Life: The life in God. A purposeful life. The experience of my Creator’s powerful presence and the promise of eternal life. Help me to harvest the fruits of your Spirit - peace, patience, self-control, generosity, perseverance, honesty and hope.

Jesus, reveal your way, your truth, your life - a life lived in and for the Lord. Amen. 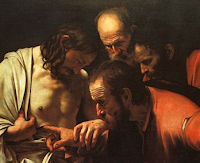 Very appropriate! St. John’s Doubting Thomas story was the Gospel reading last Sunday. After the Easter celebration, my own need for verification creeps in. The doubt of Thomas resonates:

Lord Christ, your life was a succession of reality bending events: the virgin birth, water to wine, feeding the multitudes, walking on water, healings, raising the dead, your own resurrection.

Blessed are those who have not seen and yet come to believe. (John 20:29)

Much is made about faith as a decision. Are you saved? Do you believe X, Y or Z?

…but I thank you for the blessing of faith. It has crept up on me. It didn't happen in a flash. It has enveloped me over the years. It’s clearly a result of your grace. And that is verifiable in my life. My Lord and my God, I believe! Amen. 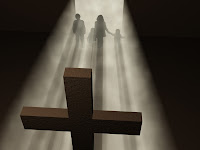 Our tradition presents Easter as a pardon - a pardon from sin and death.

The mistakes and missteps of your Resurrection People are pardoned. And Christ-followers are pardoned from death - granted eternal life.

Our tradition is inclined to stir up some anxiety, too, around the shame of sin and our fear of death.

Lord Christ, I most gratefully accept the pardon. I readily confess that it is undeserved, but let me share this Good News with your grace. Use me to dial back the fear.

Your Easter words to the women at the tomb:

Mistakes and missteps don’t block a relationship with our Creator. Christ-followers need not fear God.

Holy Spirit, stir up in me a joy-filled, no fear faith. Amen.

This prayer was inspired by a Sojourners blog post from Pastor Tripp Hudgins.
Graphic credit
Posted by George Habel

Things of eternal import should be overwhelming.

Fluttering palms and loud hosannas. The Passover meal. Your confrontation in the temple. Anointing and plotting. Foot washing. Parables, prophecy and prayers. The arrest. The inquisition. Your crucifixion. The burial. Denials and the despair of your followers.

The triumphal entry at Jerusalem rapidly devolves into a murder sanctioned by both church and state. A life of only three decades, a ministry of only three years, it all comes apart so quickly.

God does not respond to the prayers of those standing beneath the cross. The hoped for Messiah does not lead a revolt against the government.

And he took bread, gave thanks and broke it…
This is my body given for you; do this in remembrance of me.

After the supper he took the cup…
This cup is the new covenant in my blood, which is poured out for you. (Luke 22:1-20)

Jesus, you offered a flesh and blood sacrifice. God did intervene.

Your lifeless body was revived, and believers are lifted up with you.

You continue to lead a revolt against evil and a revolution of the human heart.

Praise to you, Lord Christ, for the overwhelming, empowering, eternal significance of Easter. Amen.

Here’s a big disclaimer: I liberally "sample" ideas and language from my daily Bible study - Encounter with God - from Scripture Union USA. Some might consider it plagiarism. I prefer to think of it as improvisation, and I attempt to give the SU expositors credit.