Praying for a New President

The title's double meaning is intended as such...to be provocative. And this post is more venting than praying, but God is listening, the Spirit is nudging... 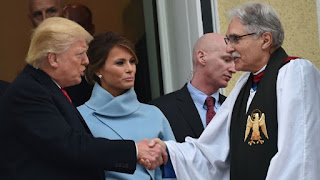 I couldn't vote for Donald Trump. It had absolutely nothing to do with Republican vs. Democrat. I was put off by his hateful demagoguery. Was that campaign style his true substance? Washington gridlock is preferable to a belligerent pugilist in the White House.

I acknowledge that he gave voice to the frustrations and fears of many who have been be hurt by global trade and workplace automation. People who have lost jobs, taken pay cuts or had their benefits reduced. People who have watched their hometowns decline right here in NC as furniture and textile mills were shuttered.

That I understand, but the "heart" of his rhetoric was impossible to abide. DJT emboldened racial bigotry, degraded women, threatened immigrants, and scorned the poor*- even the handicapped. And his supporters chanted and cheered. Tapping into voter frustration is savvy politicking, but bringing out the worst in people is dead wrong. I just couldn't get past that collision of politics with my faith. The soul of America matters to this naive idealist!

Yet DJT was elected president. And I want to move on. I can't quite say that he is my president, but I need to accept the reality that he is our president. Further protest, lament and wishing for his failure portends even greater backsliding for the Nation.

A glass half full: I hope his business acumen and deal-making instincts mean that he can solve a few of DC's intractable problems. Unlike our political leaders, he seems to be a results oriented pragmatist. He isn't bound by ideology. He's not a conservative and he's barely a Republican. I'll give DJT a chance. Washington and its system are broken. I believe he was elected as the populist disruptor-in-chief who might have some luck as a fixer.

So, I will pray for President Donald John Trump:

...for sound judgement
...for his effectiveness
...and for his heart.

May he rise to the occasion and to the myriad challenges of the office.

May the citizens of these States be United.

May this rich and powerful country be a blessing to the planet.

Here's a prayer I posted after the 2012 election. It seems to be an evergreen!
Put not your trust in rulers.

My Bishop on prayers for the president.